Geneteka is a free database of indexes of vital records created by enthusiasts of genealogy voluntarily working at the Polish Genealogical Society (PTG – Polskie Towarzystwo Genealogiczne). The history of the database is somewhat important to understanding what we can find there and especially why the indexes are so different.
Since I was not involved in the early years of building this database, most of the information I gathered from the posts on the PTG Forum which is a part of the Genealodzy.pl portal . In writing the draft of this article, I consulted with people involved in the beginnings of Geneteka. Some of them improved it, some wrote their own versions.

A childhood of Geneteka

The beginnings of Geneteka can be dated to somewhere around 2004. At that time, Marek Minakowski indexed some Kraków marriages and published them on his page przodkowie.com. Tomasz Nitsch, in his proposals of program objectives of the Polish Genealogical Society, stated that the major task of PTG should be creation of the database of indexes of vital records.
At the beginning of 2006, Jacek Młochowski, inspired by Marek Minakowski’s marriage index, expanded that formula and created a first version of software for Geneteka. Later that year, when he became the first President of PTG, Geneteka naturally started as an offshoot of the Genealodzy.pl Portal (in the beginning all parts of genealodzy.pl site were created by Jacek Młochowski).
The first entry on the thread „Indexes submitted to Geneteka..” was done by Jacek on August 3, 2006, stating that he added 722 indexed vital records from Białobrzegi near Radom. More than half a year later, on October 3, 2007, we celebrating the goal of having 100,000 records indexed. The next milestone were reached over one year later – Leszek Ćwikliński (the second of the administrators of Geneteka) reported in October that the number of entries had exceeded 450,000. By November, Geneteka had reached half a million indexed records. The first million was achieved on 1 January 2009, after almost 2 years. And during the first 10 days of the New Year, Leszek uploaded 100,000 indexed records – as many as during the first six months of Geneteka’s history.
In August 2009, Leszek began to receive support from Marta Nalazek. Marta’s role in developing Geneteka is significant — she was administrator of Geneteka for 5 years — most of the time of its existence — and for many of us is the public face of Geneteka . In September, Marta added her first indexes of vital records, so database exceeded the number of 2,000,000 indexes.

There are several reasons for that revolutionary change. Creating the first indexes was a very challenging job – usually someone had to sit in a library and transcribe vital records (using paper and pencil), then type the information into a home computer and send to the database. Some increase in speed was achieved when archives allowed individuals to photograph vital records books. At that point, the administrator of Geneteka spread the word that some books were available for indexing, and volunteers could upload such photographs for indexing. The real breakthrough was an agreement between the State Archives and PTG to photograph the resources of the State Archives on a regular basis – at that point, the amount of photographs exceeded the number of people eager to index the records.

The maturity of Geneteka

2010 was a big year for Geneteka. Marta was supported by Marcin Ciesielski in administration, and a person with the nickname Biblioteka began to attach links to scans of original vital records. Sebastian Gąsiorek (who was just recently, in October 2015 elected as the new President of the PTG) created a user-friendly admin panel and was included in the work on the development of Geneteka. About 100,000 marriage records from Marek Minakowski were attached to the database. In April of 2011, Geneteka exceeded 5 million indexed records — 1 million records were indexed within 5 months. A similar result was achieved within the next 5 months, in October, and by March of 2012, the vital records database at Geneteka included 7 million indexed records.
In 2012, the format of data input was changed. New information was added, such as the column “vel” where volunteers can add additional names of for the subject of record like the maiden name in death records of married females. The search function was modified to reflect this change, so that a search would reveal a woman both under her maiden name and also under her married name. The search engine was also improved in other ways as well. Additional administrators began to rewrite the old indexes, pulling extra information from comments and inserting it in the appropriate fields. Fortunately, from the beginning of the year Marta began to be assisted by Keret (Maciej Terek), and by the end of the year, Michał Zieliński had joined the group.
The amount of submitted indexes stabilized, and another million indexed vital records were added every 5 months, so that by June 2013, Geneteka made another symbolic breakthrough: 10 million records indexed.
Over the next 4 months Geneteka reached an all-time high, with volunteers indexing another million records during that time. After that peak, indexing returned to its previous pace of one million records every 5 months, until 13 million vital records had been indexed by June of 2014.

Changing of the guard

On July 22, 2014, Marta posted the update on „Indexes submitted to Geneteka” for the last time. During her tenure as administrator, Geneteka added about 11 million indexed records. Beginning on August 31, 2014, a new administrator, Tomasz Turniak, took the reins, aided by Karolina Kosińska, myself (for a few month, I quit because of illness), Marcin Zieliński and Igor Daniszewski. Parishes within Świętokrzyskie and Małopolskie provinces were always handled by Keret (Maciej Terek), and for several months, Rutar (Artur Godlewski) acted as administrator for indexing in the Łódź province.

At that time, some additional improvements were made. The most important was adding information about sources of indexed vital records (letter Z) to provide the address of the archive to researchers interested in obtaining an image of the vital record. A visible change for users of the search engine was also the addition of the date of the event.

As I wrote earlier, during its 9 years of existence, Geneteka has undergone great changes in providing access to documents. When Geneteka was started, indexing was done by painstakingly transcribing information from vital records directly from the record, sitting in the archives, or in front of a microfilm reader in the Family History Center, or from original vital registers. No one anticipated a need to record anything more than the number of the record, and the first and last name, so volunteers worked mainly from the year-end alphabetical index , rather than the original documents. Unfortunately, this method reproduces indexing mistakes made by the priest, and it also omits important information, such as the names of the parents of the child in a birth record.
For this reason, more and more previously-indexed registry books are being indexed once again, but from original records not summaries. In this way, not only are mistakes in indexed entries corrected, such as errors arising from illegible handwriting, but also additional data is added.
Unfortunately, because of the creation of these new indexes, the original indexes are disappearing. Over the years, nearly 1,000 volunteers have indexed records for Geneteka, some of whom have since passed away. To preserve the memory of all the volunteers, information about each person who assisted at any time in indexing records for the parish is displayed at the bottom of the page when one searches vital records for that parish.

Indexer – A volunteer who transcribes data from vital records into a spreadsheet on a computer. Required skills: good eyesight for handwriting recognition, basic knowledge of Polish, Russian, German, or Latin; familiarity with the structure of vital records. Very experienced indexers like Waldemar Chorążewicz worked as coaches for newcomers, but now it is a task for database administrators.
Database administrator – A volunteer who puts data into database, but first has to check consistency of data, add additional information, and often reformat Excel sheet. Additional tasks include rewriting old records to new formats and supplementing with information on sources. Required skills – advanced proficiency in using Excel spreadsheets.
IT administrator — These volunteers handle database software maintenance and updates, backups, etc.

A very special thanks to Julie Roberts Szczepankiewicz worked worked hard on my translation to make this article clear and logical.

Searching ancestors at cemeteries in Poland
about this blog 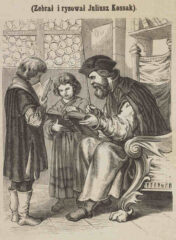